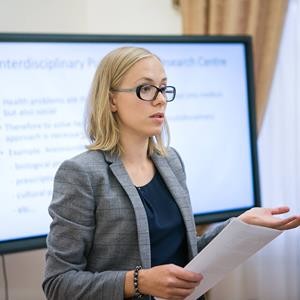 Olga Zvonareva has received an ERC Starting Grant, a European research grant for young academics at the career stage at which they are starting their own independent research team or programme. Olga received the grant for her research project 'Public participation by other means? Informal practices to engage with matters of collective concern in nondemocratic settings'.

Olga: "With the growth of distrust and alienation between citizens and established political institutions, it is urgent to improve democracy by finding new ways of involving citizens in decisions that shape their lives. I make a counterintuitive proposal to look for new modes of public participation in informal practices creatively employed by citizens to contest governance arrangements, especially in settings where they are discouraged from doing so. Scholarship traditionally defines public participation as dependent on making issues public, i.e. visible and debatable, whereas informality is considered dysfunctional and anomic, not least to democracy itself. Therefore, informal practices that involve working around formal procedures and public spaces, and depend on remaining invisible, have not been explored as modes of public participation. My project is a comprehensive study of public participation by means of informal practices. It takes a qualitative approach inspired by the ethnographic ‘rear-mirror’ methodology to comparatively investigate local (Russian healthcare system) and global (pharmaceutical industry) sites where non-democratic situations abound and identify how informality mediates participation in health, a domain personally relevant for many citizens because their lives are at stake. I will elucidate the effects of this mediation and elaborate the theoretical significance of conceptualising certain informal practices as public participation. This project will offer a fundamentally novel insight into the impacts of informal practices on formulating and addressing matters of collective concern, enable discerning a wider spectrum of participatory modalities, and open up new avenues of democratisation. I will draw on my previous research on informality in health and pharmapolitics and on my extensive international network to achieve the project goals".